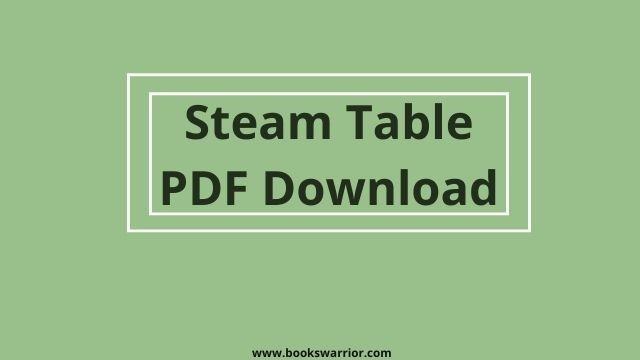 Steam table pdf download: Steam is a gaseous form of water or we can say it is a vapor state of liquid. Steam is formed when liquid is heated upto or more than boiling point, a variety of liquids have different boiling points. Steam gets prepared when liquids gain energy in the form of heat and energy at which water starts becoming vapor is known as enthalpy of vaporization.

A saturated form of steam is always visible because it contains wet vapors of liquid while dry steam is invisible.

Steam is formed when liquid/water is heated continuously. There is slight rise in volume of the liquid when it is heated but that change is very small, that can be neglected. Boiling point of pure water is ≈100°C . Heating for a long time doesn’t increase the temperature more than boiling point but its rate of evaporation increases and it will continue to evaporate until the whole water vanishes.

If we still keep on heating, then the temperature of dry saturated steam rises and it starts following laws of perfect gasses; this phase is known as superheated steam. This superheated steam is used to generate steam electricity and to run engines.

It is defined as the volume occupied by steam per unit mass at a given temperature and pressure. It is expressed in the unit of m³/kg that is a reciprocal form of the unit of density. The specific volume of steam is directly proportional to temperature.

It is defined as the rate of heat absorbed per unit mass from the freezing point of water that is 0°C or 273K.+ the heat absorbed during evaporation. Its unit is kJ/kg. It is also directly proportional to temperature and pressure.

Entropy means randomness that’s why it is a theoretical value of heat that can’t be transformed to mechanical use under given conditions of pressure and temperature. It is also called as degree of disorder in short DOD. It is inversely proportional to temperature and pressure.

Delta(r)=delta(Q)/delta(T)
i.e., change in heat divided by change in temperature.
It is expressed in kJ/Kg•K

The different properties like entropy, specific heat and specific volume vary with changes in temperature and pressure. These values are derived after a detailed analysis and behavior of liquids in laboratories and observatories under certain conditions. Since these values are quite small in magnitude, that’s why in rounding them off there might be slight differences in values from book to book.

Important Steam tables are given below:-

It contains values of pressure, specific volume, specific enthalpy and specific entropy in bar, in m³/kg, in kJ/kg and inkJ/kg•K respectively