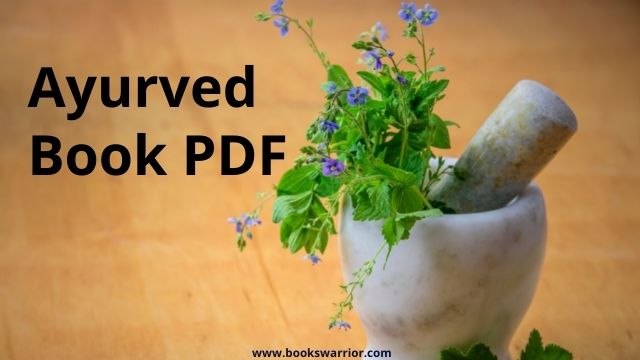 Ayurved book pdf: Ayurved/Ayurveda is the oldest medication system, it is believed to have existed 5000 years ago. The word “Ayurveda” is composed of two words in which “Ayur” means long life and “Veda” refers to knowledge or Science.

Charaka Samhita, Sushruta Samhita and Ashtanga Hridaya are the ancient texts of Ayurveda. In these texts, the effects of the five great elements in the universe – earth, water, air, fire and sky elements on human beings and the importance of keeping them balanced for a healthy and happy life have been propounded.

Ayurveda makes the use of naturally available materials(herbs, leaves, roots etc) to treat the diseases.

Ayurveda is largely practiced all over India and in Nepal also.

Ayurveda is the discipline(Upveda) of Rigveda and logist of Ayurveda is known as “Prajapati”. Much evidence received from the Indus Valley Civilization gives the idea that Ayurveda existed at that time also. Many people believe that Ayurveda is given by Dhanvantri while some give its credit to the sage Agnivesh.

But in reality it is quite difficult to give credit of Ayurveda to anyone because there have been changes in them by many sages and logists of vedas.

We can claim that Ayurveda is extracted from Vedas, Samhitas(Chakra Samhita and Shushrut Samhita) and many other ancient texts.

In Ayurveda, human health is described to be based on four Dosh (दोष) which are Pitta Dosh (पित्त दोष), Vata Dosha (वात दोष) and Kaph Dosh (कफ दोष). These three doshas are important because these doshas affect not only the shape of one’s body but also physical tendencies such as food preference and digestion, and the disposition of one’s mind and emotions.

Ayurveda says that a person is always born with a slight imbalance in these dosha.

Pitta Dosh(पित्त दोष):-  Ayurveda states that pitta dosha is responsible for heat, transformation of mind and metabolism of the body. We can say that it controls the digestion of food, metabolizes sensory perceptions and gives us an understanding of which body /object is harmful to touch. People with imbalance in Pitta dosha suffer from anxiety, arthritis, fever, migraine, rashes etc.

Vata Dosha(वात दोष):- Vaat Dosh is considered as the most important dosh among the three dosha because it is related to motion of the body.

Kaph Dosh(कफ दोष):– Kaph Dosh is composed of elements of the Earth and

Water works to maintain the body tissues and keeps them up to date. It is also responsible for mental strength and durability of the body. Variation in level of Kaph dosh results in weakness, laziness, more emotional, sadness etc

Ayurveda treats these dosh to cure the disease. There is one more term “Panchkarma” also somewhere related to Ayurveda. Panchkarma is practiced to remove dirt from our body.

Thus Ayurveda plays a very deep and convincing role in treatment of diseases.