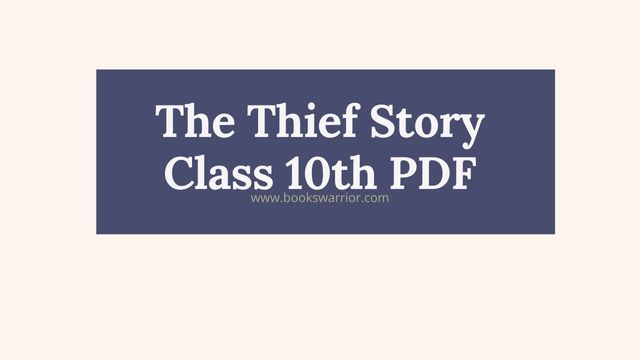 The thief story class 10 pdf: let us see the summary of the story the thief story by Raskin bond. Hari Singh was a thief, he was merely 15 years old but was quite good for his age in fact Hari singh wasn’t even his real name. He used a different name every month to avoid getting caught, the first time Hari met Anil was at a wrestling match Anil looked like the perfect mark simple kind and easy going.

So Anil agreed and took him in that night Hari made dinner, it was so bad that Anil gave it to some stray dogs and told Hari to leave. However, Hari just stood and kept smiling at Anil relented he let Hari stay and taught him how to cook.

He also taught Hari how to write his name and promise that one day Hari would learn how to write whole sentences and add numbers also Hari was glad with some education he could be better at what he did.

Hari found it easy to work for Anil every day he would make tea in the morning then he would go to the market to buy supplies, he always made a rupees profit every time.

Hari also learned quite a bit about Anil was a writer and did not make steady income when he did he would go out and celebrate and when he didn’t he would borrow and worry about his next pay check. One day Anil came home flush with several banknotes he had just sold a book to a publisher, he safely hid the money under his mattress.

It had been some time since Hari stole from someone, he made up his mind to steal the money that night he crept up to Anil’s bed and carefully extracted the money then he ran, he ran until he came to a bazaar by the station.

Then he slowed down and counted the money there were 600 rupees in the bundle Hari taught that he would live like a king for the next week or two, thinking this he came to the station.

The Lucknow express was just leaving the platform, if he ran he could easily jump into one of the compartments, but something stopped him Hari stood still and watched as the train left.

he was all alone now and had nowhere to go, he thought about Anil and how his house was the one place he would he could go back to, so having nowhere to go Hari started walking aimlessly and came to a Maidan there he sat on a bench thinking about Anil’s reaction.

He knew Anil would feel sad not at the loss of money but at the loss of trust. He took out the notes then he thought about his time at Anil, he remembered that Anil had promised to teach him to write whole sentences.

One day he thought knowing whole sentences would bring him more than thieving could after all stealing was easy but becoming a clever and a well-respected man that was better.

So, Hari went back to Anil and put the money back under the mattress next day when he woke up Anil was already making tea, Anil gave him a 50 rupee note as part of his wages and then he declared that they were going to learn whole sentences. Hari realized that Anil knew what had happened but Anil didn’t say anything moved Hari gave Anil a smile a genuine and heartfelt smile.