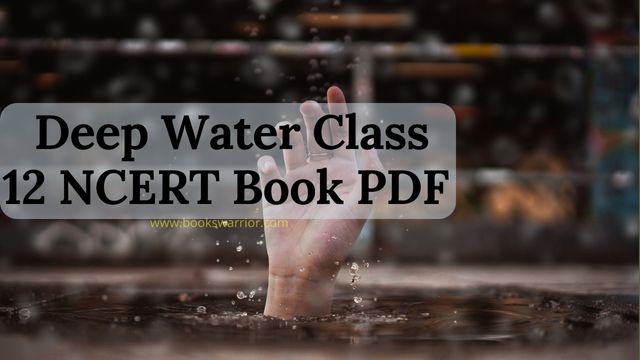 Deep water pdf download: Hi everyone in this article we are going to talk about the story of deep-water class 12 by William Orville Douglas. The story begins with the narrator describe an event that took place when he was 10 or 11 years old. The narrator had decided to learn swimming at the YMCA pool in Yakima. He was at first worried when he stepped into the YMCA pool.

Since it agitates unpleasant memories when he was about three or four years old his father had taken him to a beach in California, the waves had strike him over and he had been covered by water.  This experience had filled him with a deep fear of water and the narrator felt this fear resurfacing at the YMCA pool but over some days he gets control of the fear by observing and emulate the actions of other boys who were swimming.

One day the narrator was sitting alone by the side of the pool waiting for the others to turn up, he did not have the courage to enter the pool alone, a huge boy of 18 years came in picked him up and threw him into the deep end of the pool.

The narrator scared as he sank to the bottom of the pool, but he kept his will about him he decided to push himself up to the surface, when his feet touch the bottom and then paddled to the edge of the pool unfortunately, he came up slowly when he opened his eyes, he saw nothing but yellow water.

He started to panic as he rose especially when he could not get his face out of the water, as he sank slowly back down, he started to lose his breath and was suddenly rigid with fear he reached the bottom and he jumped again, coming up slowly he was overcome with terror again and froze.

He almost came up but again went back under dullness surrounded him as he gave up the struggle to survive tried out that seemed to welcome him and he lost wakefulness. The next thing he knew he was lying beside the pool vomiting the water that he had swallowed he had been pulled out of the water just in time.

This experience left him feeling unsafe and helpless and from that day he was scared of water once more as he grew older. This fear stayed with him and ruined his fishing trips it prevented him from enjoying simple joys of life like canoeing boating and swimming.

Finally, he decided to learn swimming from an instructor he started practicing five days a week at a pool.

First, he swam repeatedly up and down in a pool with a belt that was attached to an overhead rope, that the instructor held he panicked every time he went underwater but this subsided over three months the instructor then taught him to breathe and kick properly and eventually, he learned to swim without help.

The narrator was overjoyed but puzzle about, if he could swim alone without his instructor’s support, he managed just fine to curb his lingering doubts, he swam alone across lake Wentworth and across warm lake which he had visited before he did experience his old fear once in lake Wentworth but was able to ignore it.

When he was able to swim across warm lake and back, he was ecstatic at having conquered his fear the narrator ends the story.