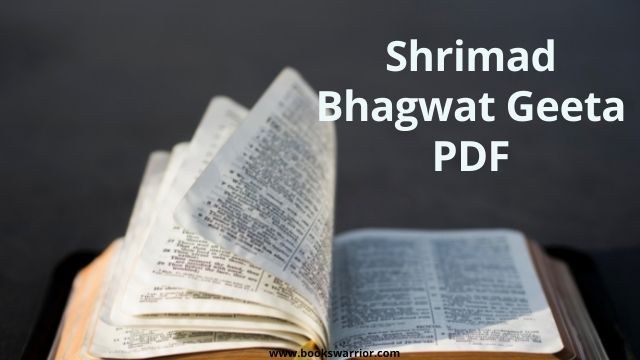 Bhagavad gita pdf: Srimad Bhagavad Geeta is the full name of Bhagavad Geeta, often it is also named just “Geeta” which means “Song of God” . Geeta is one of the sacred books of Hindu mythology, it narrates the conversation between Pandava prince Arjuna and his guide Krishna. It contains 18 chapters which house 700 verses. In which Krishna narrated 574 verses, Arjun narrated 85 verses, Dhritrashtra narrated 1 verse and Sanjay narrated 40 verses.

According to sources of the past and Wikipedia, Geeta was authored by “Vyas’ ‘ Guru. Originally Vyas wrote Geeta in Sanskrit language but it was  further translated in other languages because of inclusion of western culture didn’t focus on Sanskrit language which resulted in lack of knowledge of Sanskrit in fourth generations also for the convenience of readers who can’t read Sanskrit language.

Geeta is the part of the great epic Mahabharata in which Krishna shows the path and enlightens Arjun to proceed to his destination. Along with Arjun, there were Dhritrashtra and Sanjay too who received a small portion of Geeta in the form of verses while Krishna was narrating to Arjun on the battlefield of Kurukshetra.

Sanjay was the one who told Dhritrashtra that Pandavas wanted to regain control over Hastinapur but Dhritrashtra was stuck to his decision.

Sanjay said that Arjun who belongs to the Pandavas has come to regain control over his kingdom, with Sri Krishan as his charioteer.

Arjun wanted to have a calm and soft discussion for the Kingdom of Hastinapur but Kauravas turned violent.

Arjun was not in favor of violence because in his view killing of evil and his family is a sin. Now Sri Krishna came forward, who guided Arjun and made his mind to fight for his rights and the welfare of his kingdom.

Krishna begins narrating the systematic process of Why it was Arjun’s religious duty and responsibility to fight in order to obtain his kingdom back.

Krishna first narrates about the process of incarnation, birth and death. He says that there is nothing like death, your soul is immortal it changes position from one body to another body. When one person achieves his duty and successfully completes the karma that soul wants to get done from your body, it simply leaves off your body. Body is mortal but Soul is immortal.

Krishna then narrates that for achieving nirvana one needs to follow three paths that are:- Sacrifice, philanthropy and meditation (Yoga)

Geeta ends with the sayings of Krishna that one should follow the path of god or evil as per need because ultimately you are fighting for your rights and welfare of the kingdom. There is nothing sinister.

After this, Arjun proceeds on the paths of Sri Krishna which proved to be a game changer in the battle field.